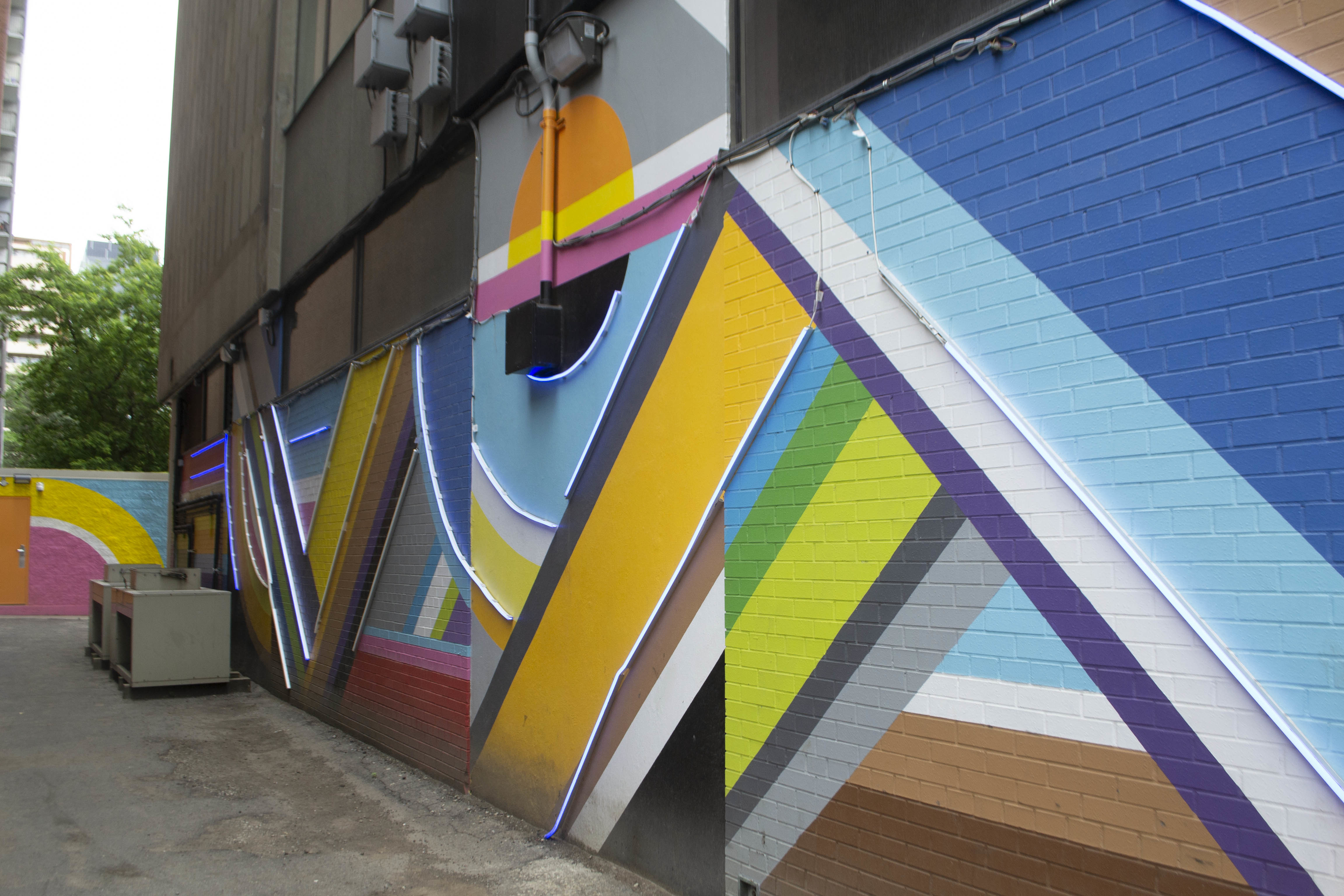 Curated by Marnie Mandel, mural artist David Guinn and lighting designer Drew Billiau have combined their talents to create an illuminated mural on the west wall of 150 Eglinton Ave East. The project was commissioned by Madison Group to highlight a pedestrian thorough way from Eglinton Avenue to their parking lots. This work is part of a larger scheme by Madison Group to invest in art for the public on their properties. Owning several properties on Eglinton Avenue, Madison considers the inclusion of art as an opportunity to enhance community spirit as well as brighten up the area – in this case literally!

150 Eglinton Avenue East was constructed in the 1960’s in the International Style, recognized for its minimal ornament and a strong emphasis on material and form. For this building, the inspired minimalist identity is transformed with a mural design that incorporates architectural forms, bold colours, and influences from art history. Guinn explains, “The surrounding environment at the site is defined by the right angles and grey tones. The goal in designing the mural was to provide a dose of bright color and contrast the strong vertical structure of the building with curves.” Guinn’s background in architecture heavily impacts his aesthetic. His works use architectural shapes and forms, such as arches, rectangles, squares, and rondels in various angles. “It was important to work with the architecture of 150 Eglinton Avenue East. Lines in the composition reinforce existing lines established by rows of windows and breaks in the wall surface.”

For this work, Guinn was inspired by Geometric Abstraction and most notably the artwork of Sonia Delanuay (1885-1979). Sonia Deluanay was a member of the Paris avante garde interacting with the likes of Picasso, Braque, and Rousseau. She was a prominent member of an art movement called Orphisim, although she called it Simultanism. The movement’s objective was to wed colour to form in order to achieve visual intensity. Her exploration of the interaction between colours to create a sense of depth and movement is a practice Guinn successfully achieves in this mural. In his words. “I wanted to create an energetic composition that captured the energy of the bustling Yonge and Eglinton area.”

Guinn’s use of a myriad of bright contrasting colours reference Delaunay and amplify the geometric patterning of the artwork. The colours selected for the work reference the 1980’s, a time of experimentation in technology and design from the invention of Apple, the beginning of MTV and the music video phenomenon, and the unique designs of the Italian Memphis Group. This colour palette and aesthetic have experienced a resurgence in popularity in art and design garnering through various social media platforms. Though seemingly abstract, the mural design also references aspects of nature. The orb at the peak of the mural is meant to represent the sun or the moon depending on the time of day, while the rectangular shapes are inspired by horizon lines, and the arcs of colour are hills and valleys. Guinn believes these elements help make the mural relatable to viewers “by connecting to our unconscious frameworks for understanding the world around us.”

Drew Billiau is a lighting aficionado. He specializes in designing meticulous light displays for opera, dance, and theatre. This mural’s light display is created using neo-flex: an environmentally friendly and safe alternative to neon. The neo-flex rods were thoughtfully applied to the mural by Billiau to contour the shapes of Guinn’s design and enhance the visual experience of the work.

For this work, Billiau had two goals: to create an arresting piece of visual eye candy, and to impact viewers emotions with a seamless interchange of bold colours. Inspired by the preeminent light artist James Turrell, Billiau considers light and colour an opportunity to impact emotion. In his career, Billiau has spent a considerable amount of time learning from Turrell by meditating in his “skyscapes.” These works have influenced a diverse range of creatives,, a facsimile of one even appeared in Drake’s music video, “Hot Line Bling.” As Turrell’s website explains, “A Turrell Skyspace is a specifically proportioned chamber with an aperture in the ceiling open to the sky.” The rooms are painted unique colours to either complement or contrast the colours of the sky. As the sky’s light emittance changes throughout the day, the chamber’s ambiance shifts, thus influencing the audience’s mood. Billiau mimics the meditative experience in a Turrell skyscape by creative an interchange of colours that is slow and measured.

Light art has a rich history. Alongside Turrell, Pop Art and Minimalist artists began making work with light projection and neon in the 1960’s. At the time, neon was considered a commercial medium meant for gaudy advertisements and public signage. In the hands of Pop artists, neon became an emblem of urban life and commercialism. Andy Warhol called neon one of “the great modern things.” Minimalists such as Keith Sonnier experimented with neon as a sculptural material. He was interested in how the light radiating from the neon allowed him to transform space: dividing, opening or restricting through colour and light.

In the 1990s neon re-emerged in the cultural zeitgeist, this time championed by the Young British Artists (YBAs) such as Tracey Emin.  For this group of artists, neon was used as a tool to intensify communication especially in text-based art. Mary Weatherford is one of the most notable contemporary art using neon in her work. In her abstract canvases there is often a neon rod attached. She believes the neon adds an extra layer of meaning and intensity to her paintings. “When I stumbled upon using the light, then that became clear,” she has said. “It was a way of making paintings about some kind of representation of the complex symphony of human experience.” Billiau would certainly agree with this statement.

The artwork is well situated amongst the bright lights of Yonge and Eglinton and only a few short blocks east from the busy intersection. The murals bold colour scheme and neon glow draws us eastward as was the intention of the artists and aspirations of the developers.

The orb at the peak of the mural in many ways personifies the renaissance happening in this stretch of Eglinton and is therefore a very well-situated and appropriate piece of public art.